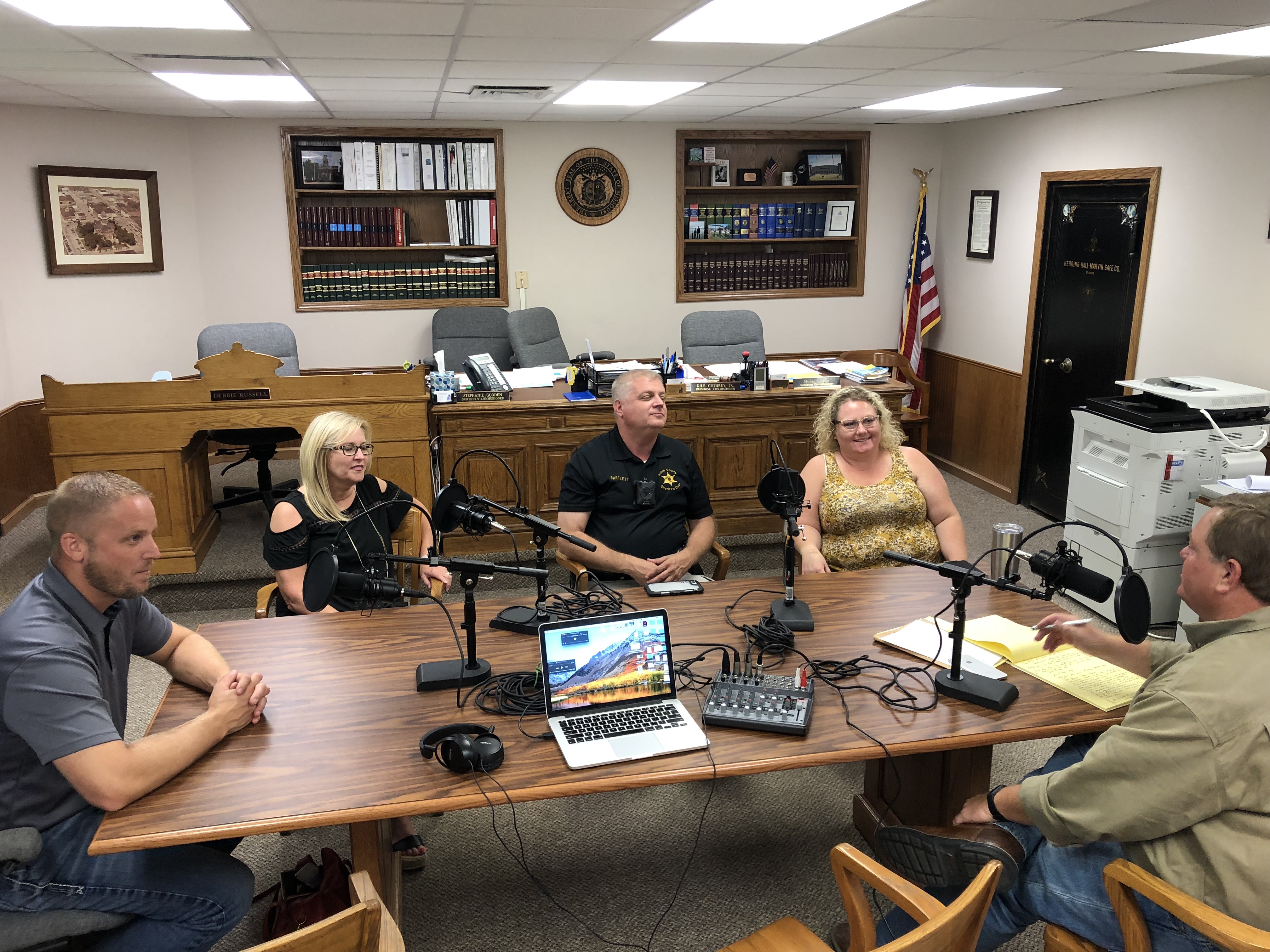 This week, the show traveled to Marshall, MO; county seat of Saline County. We had a panel of experts including Saline County Assessor Jessica Adcock Goodman, Brad Bartlett of the Sheriff’s office, and Farm Bureau Insurance Agents Cindy Hayob and Justin Schuster.

Way before the area was settled by Europeans, the tribe of the Osage knew this land as home. It wasn’t until a frenchman by the name of Philip Renault established a fort about ten miles north of St. Genevieve that the first white settlers came to the area. Interested in getting into the mining business, Renault believed Missouri to have an abundance of gold and silver, and came to what would later be known as Saline County to find it. In order to complete this heavy mining work, Renault brought what are believed to be the first slaves to Illinois and Missouri. However, instead of finding any gold or silver, the mining crew found large quantities of salt, along with smaller quantities of lead and iron ore. These salt mines are where Saline County got its namesake, due to the saliency (or large quantities of salt) of the soil and water.

The Lewis and Clark expedition also came through the area in June of 1804. However, the first permanent settlement of the county wasn’t created until 1807 when a man named Captain George Sibley ordered a company of traders to establish a trading post where the town of Arrow Rock now stands. Because of this post, and with the town being right on the river, much of the early history of Saline took place in this town.

During the first session of the Missouri state legislature in Sept. 19, 1820, an act was passed creating the county of Saline, among others. Originally, a town by the name of Jefferson was named the first county seat. After this initial county seat was established, it was moved multiple times before it found its permanent home in Marshall. In 1831, the seat moved from Jefferson to the town of Jonesboro. Not believing Jonesboro was close enough to the geographic center of the county, the seat was then moved to the town of Arrow Rock in 1839 until a better alternative was found. After a month of debating by the commissioners of the county, it was decided that Marshall was the best place for the permanent county seat.

After Marshall won the decision, it was time to establish a proper court house. 65 acres of land was donated by a man named Jeremiah O’dell on April 18, 1839 for the city of Marshal, named after U.S. Supreme Court Chief Justice John Marshal,  to be plotted out and sold.

As with many counties, stories and rumors were created and spread throughout Saline County about the burning of their court house. There may have been some people that broke in to play cards and drink when they accidentally started the fire. There may have been someone from the town of Slater, fueled by jealousy that their town didn’t have the court house, setting the fire. Unfortunately, these stories are most likely the closest we will ever get to knowing the truth of the fire. While fires seemed to have plagued the county, the court house built after this fire is the one that still stands today.

Saline County is part of what is known today as “Little Dixie” for the large amount of Upper South farmers who moved here with their slaves. With each farmstead being relatively self-sufficient for the time, a mixed number both crops and animals could be found in the county. Today, as the farming industry has become more commercialized, the county mainly produces corn, soybeans and cattle.

In 1860, Saline County had a favorite son running for governor. Claiborne Fox Jackson, one of the more notorious governors of the state due to claiming to be anti-secession before actually trying to succeed from the Union and then fleeing to Arkansas, was from the county. While he ended up winning the election, he lost the vote in his home county by 71 votes.

Looking back, the county had a strong Confederate stance, as not one person in the county voted for Abraham Lincoln when he ran. During the war, Union troops regarded the county as one of the most dangerous areas to travel through, as Confederate guerrillas would be firing from hidden areas. The battle of Marshal is also a well known battle of the Civil War, with stories circulating that they called a cease fire to remove a cow which had wandered onto the battlefield from a nearby farm. After the cow was removed, the battle continued.

A large amount of notable Missourians knew Saline county as there home, including the aforementioned Gov. Jackson, as well as Gov. Lilburn Boggs, State Rep. Martin Palmer, and a famous jazz musician named Bob James. However, the most celebrated member of the county isn’t a person at all, but is Jim the Wonder Dog. According to stories, Jim could predict the outcomes of events, obey commands in any language and was the best hunting dog in the country. This reputation earned the dog his own statue near the court house.

The county as it stands today is supported by the Central Missouri Electric Cooperative, has some larger schools and several smaller rural schools, has multiple churches of many faiths (with Catholics being the largest), and has a large mixture of Democrat and Republican citizens.