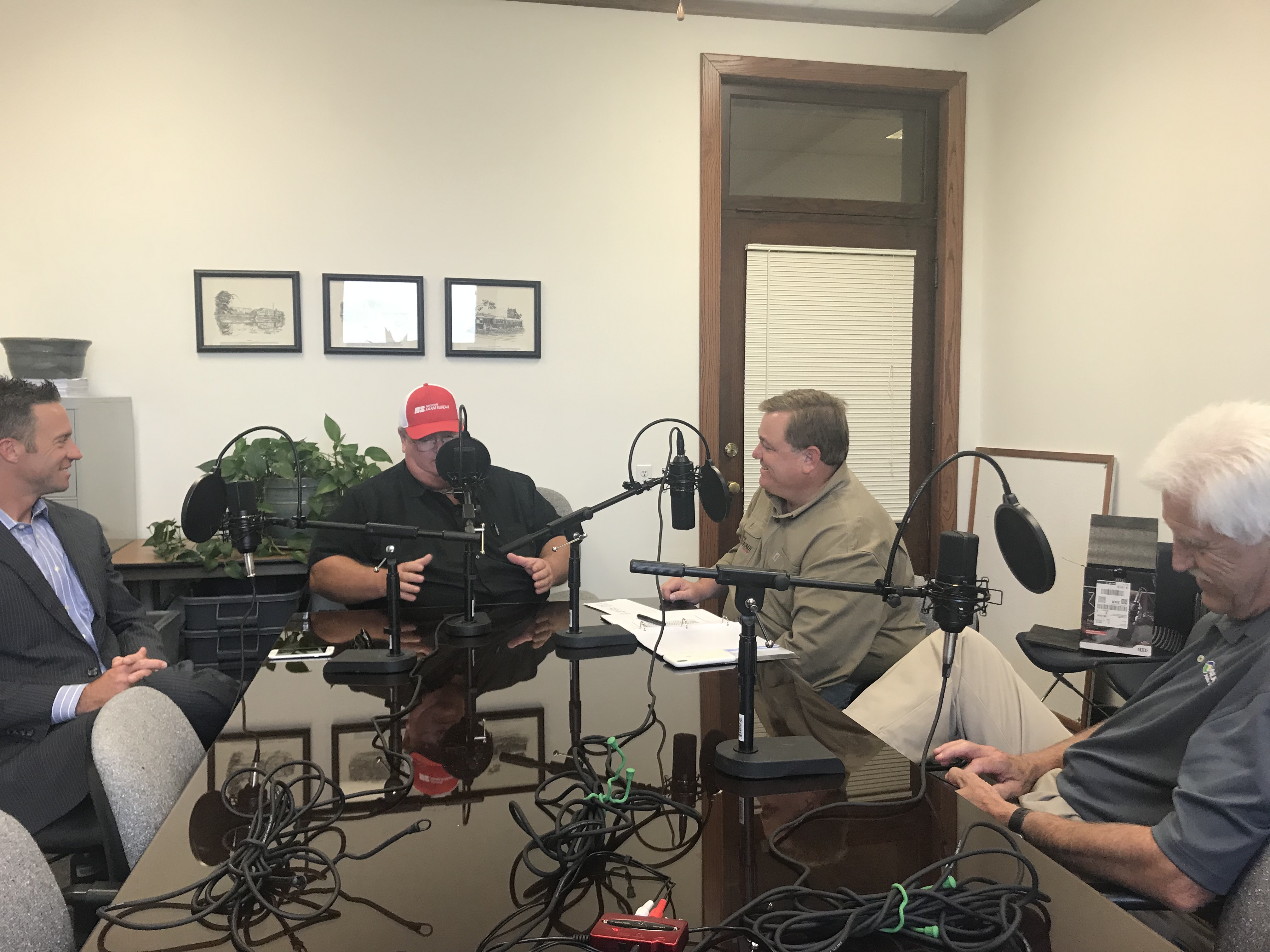 This week we sat at the old County Courthouse in Greene County.

Lincoln Hough is a 5th generation resident of Greene County. His great-grandfather was a shipman, who had the last team of working mules not very far from where Tom Huff farms today.

Tom Huff’s first ancestor was one of the first people to come into Greene County in 1833 along with Sampson Bass. Both Huff and Bass were chased away from where they settled the first time by the Osage. Huff ended up settling closer to Fair Grove after that.

Jim Baker is originally from Kentucky. He was recruited by the former president of SWMS to go to Missouri State. He had wanted to go back to be closer to his family but ended up in Springfield. “It was supposed to be a temporary thing, but 25 years later I’m still there.”

Greene County is located in southwest Missouri. According to the 2010 census, the population as 275,174 making it the fourth most populated county in Missouri. Its county seat is in Springfield which is also its largest city and the birthplace of Route 66.

The county was organized on Jan. 2, 1833, as the 37th county admitted to the state. It is named for American Revolutionary War General Nathanael Greene.

Before the county was settled, there was a large native control. Many Native American groups migrated through the area. Greene County was known as Osage Country before the war of 1812. During that time, the area wasn’t a place for Europeans to settle because the Native Americans would burn the settlers out of the land.

Greene County originally grew wheat and corn for livestock, but livestock now very dominate. Currently, there is an oversupply of milk in the country which has caused prices to drop. The country is producing more milk with less input than any time in history. Make sure to listen to the full show to hear about the current struggles with dairy farming in the country and within the county.

Greene County has 8 Public School Districts (Ash Grove R-IV, Fair Grove R-X, Logan-Rogersville R-VIII, Republican R-III, Springfield R-XII, Strafford R-VI, Walnut Grove R-V and Willard R-II) with Springfield being the largest and 10 Private Schools, all located in Springfield. There are also Alternative Schools in the county as well as many Colleges/Universities. Springfield was recently rated as the top college town in Missouri, with 40,000 total students.

Missouri State was founded in 1905 with 543 students. There are now about 25,000 students from 87 countries. The university has over 100 partnerships in many countries and also works with MU, Missouri S&T and UMKC. The university also has a growing Agribusiness Program with fits great with Greene County’s growing agribusiness economy. In the most recent years, the Ag Program has grown 15-20%. Greene County also has one of the largest beef cattle herds in the country. Because of this, several large farms donate to MO State.

Greene County has many notable countians. Our host, Scott, and guests, Lincoln, Tom and Jim talked about golfer Payne Stewart, who is remembered for his iconic golf attire and golfer Horton Smith, who won the first masters.

Actor Brad Pitt is from Springfield and his brother Doug, still lives in the area. Doug founded Care 2 Learn, an organization that provides health and hygiene needs for students. Also, Price is Right’s Bob Barker is from Springfield. He was a Drury University grad and still contributes a lot of money to the university.

Other notable people from Greene County are U.S. Senators: Roscoe Patterson, John Ashcroft and Roy Blunt. Governor Matt Blunt, from Stafford, worked to sign on farms in southwest Missouri and was part of getting the Missouri State name change. State Senator Frank McDavid was responsible for locating now Missouri State. And Missouri House Speaker-Designee, Elijah Haahr is the first speaker from Greene County.

One of the most historical events to happen in Greene County during the Civil War period was the Battle of Wilson’s Creek, known as the Bull Run of the West, that happened on August 10th, 1861. It was the first major battle that was fought west of the Mississippi. Make sure to listen to the show to hear about what happened, including Gov. Clairebourne Jackson leaving the Capitol with the State Seal.

During this time, Greene County was typically neutral, just wanting to run their farms and survive. Because of the brutality of the battle, there was a refugee encampment in Springfield for families until their homes were put back together.

Our host and guests also talked about the working force within Greene County. Springfield has an unemployment rate of 3% and businesses are struggling to find growth and expansion in the area. Many people today have stopped enrolling in OTC and other schools for job training, instead they have just started working.

These issues are of workforce development and infrastructure are key priorities that Governor Parson has identified. Having full employment is great for Springfield, but they are now struggling with the future and how they will grow.

Politically speaking, Greene County is predominantly controlled by the Republican party. The county was one of the first, longest and most consistently Republican counties.

Greene County has consistently been one of the fastest growing counties in the state of Missouri since WWII. Its Wonders of Wildlife Museum was voted the number one destination in the country. Bass Pro Shops was founded and grown into an outdoors supplier destination, located in Springfield. And the Springfield downtown area has been revitalized over the last 20 years.