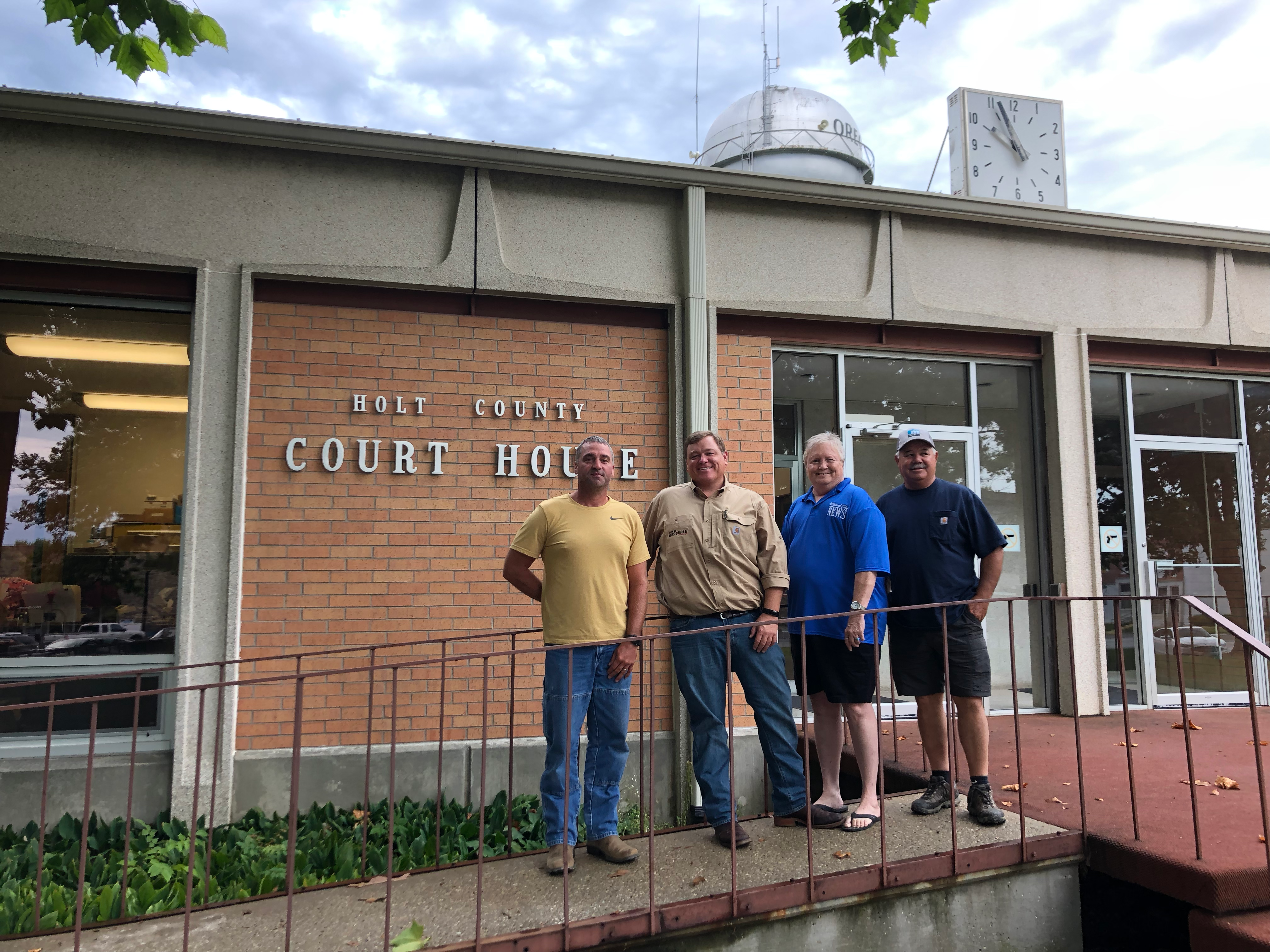 This week, the show traveled to Oregon, MO; county seat of Holt County. We had a panel of experts including reporter and photographer for the Mound City News Sherri Wright, Missouri Farm Bureau Agent Jason Kurtz and Holt County Presiding Commissioner Tom Bullock.

The 82nd county established in Missouri was founded February 15, 1841 at 470 square miles.

The land the county exists on today was one of the counties given to Missouri as part of the Platte Purchase,  which was an acquisition of American Indian land made by the U.S. government in 1836. The tribe which originally resided on the land was the Sac and Fox Nation of American Indians. After the purchase, the tribe was relocated to an area of land right across the river in Kansas, where they reside on a protected reservation today. After the purchase, the first European settlers of the area, led by Peter Stephenson, came through in 1838.

Originally a part of Nodaway County, Holt County is named after David Rice Holt, a legislator from Platte County. A physician and minister, Holt moved to Platte County soon after the Platte Purchase was made. When the time came around for the members of Platte County to elect their first member of the state legislature, they instinctively turned to Holt.

However, the Constitution of Missouri at that time prohibited ministers from serving as elected officials. Torn between serving his flock and preaching the gospel, he ultimately chose to take up the mantel of state legislator and leave the pulpit behind. The state wished to recognize the impossibly hard choice Holt had to make and, hence, named the county after him.

An issue that has been a constant since the county’s founding is flooding. The residents have learned that they are ultimately at the mercy of the Missouri River as flooding as been a hardship that the county has had to face year after year. However, the county’s residents saw just how unpredictable the river could be in 1868.

Mount City, Missouri was set to be a sprawling metropolis, as Kansas City or St. Louis had become. The city was in a prime location on the Missouri River, with multiple business being located right on the riverfront and a long shoreline that could be used for large docking and unloading of goods. However, one 1868 morning, residents of the city woke up to find that the entirety of the Missouri River had moved about 5 to 6 miles West. After the large redirection, many investors moved their money to other cities, such as St. Joseph, which officially ended the city’s chance of becoming the large city it was hoping to be.

When it came to the Civil War, there’s a saying that the Mason-Dixon Line ran right through Holt County. In fact, the county was so divided that the residents fought one of their own battles here, being the Battle of Blair Hill. That being said, it wasn’t the most epic or grand Civil War battles.

During the battle, over 2,000 shots were fired between the Union and Confederate troops. However, the only living thing that any of the Minié balls shot from the muskets hit was a horse. According to reports, that was the only casualty of the battle as well. After the battle was over, the troops gave the horse a proper burial as well.

The county today is predominately Protestant and German Lutheran, has three large schools shared with surrounding counties, and is largely covered by the Mound City Newspaper.