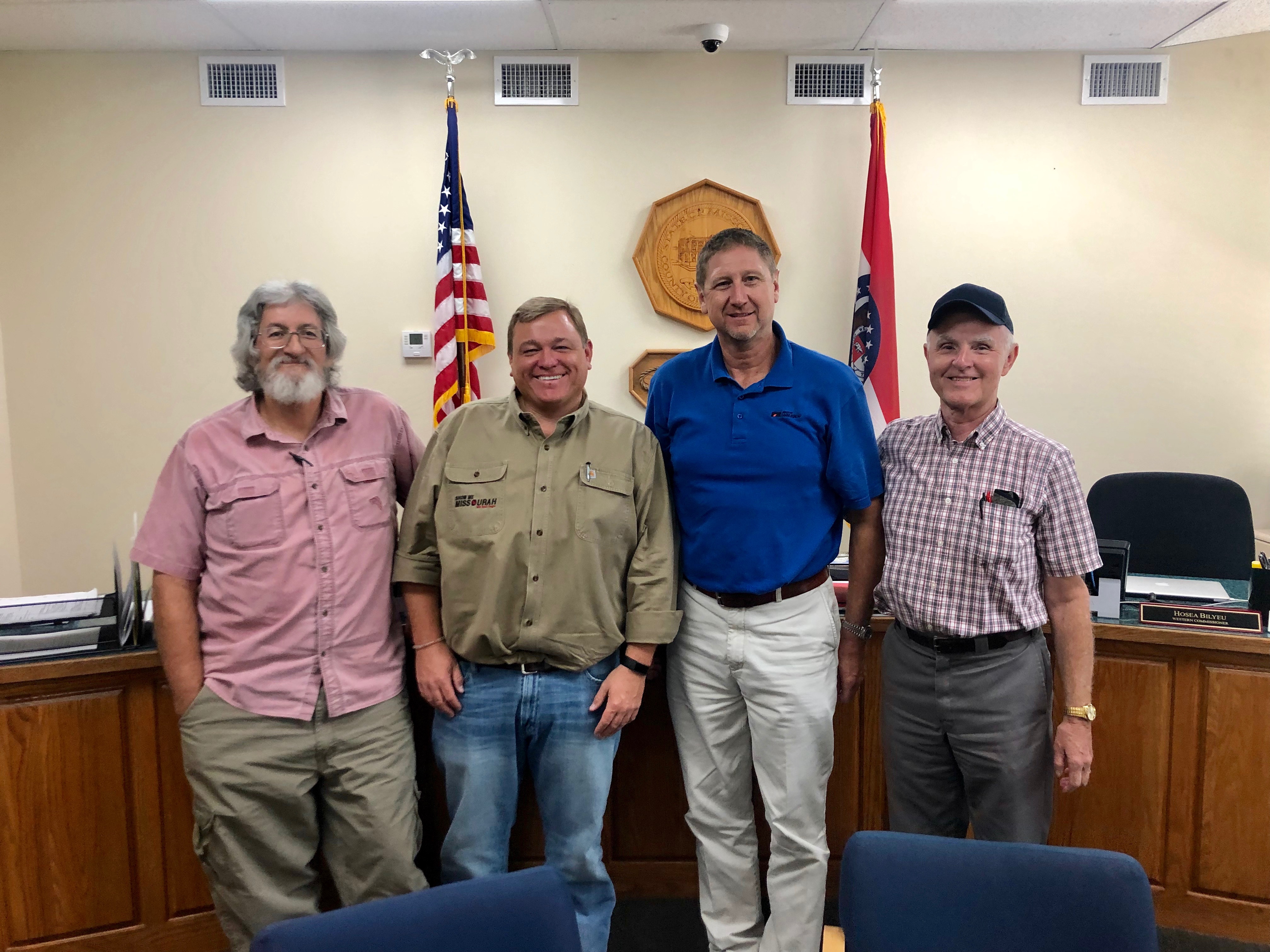 This week, the show traveled to Ozark, MO; county seat of Christian County. We may have had some of the most knowledgeable historians join us on the panel this week, including Historian and KTXR FM 101.3 The Outlaw Radio Host Wayne Glenn, Local Historian Paul Johns, and Missouri Farm Bureau Christian County Agent Kevin Cheffey.

Founded March 8, 1859, Christian County was established on 564 square miles of land as the 113th of Missouri’s counties. The first European settlers to the area were John and William Pettyjohn from Ohio in 1822 and settled on the James River. A large population came to the area when public lands were opened in 1839 for development.

The first attempt to make a new county failed due to a railroad debt that was owed by Greene County. Mining was a large endeavor in both Taney and Greene County, and two individuals by the name of Calvin Bray and Joseph Price were really wanting a new county to be formed so they could have less mining restrictions. However, due to the debt, that attempt never came to fruition. When Christian County was finally formed, mining continued to be a large benefactor for the town, with over 100,000 pounds of lead being extracted before the start of the Civil War. After the war ended, mining began again.

The county is unique for many reasons, and its namesake is another one of those reasons. Christian County was originally cut out of the surrounding counties, them being Webster, Taney, and Greene County. When the residents of Greene County were told that they would instead now be residents of the nameless new county, one resident had one condition before she would agree to make the switch. Mrs. Thomas Neaves, the then-sheriff’s wife, said she would only become a resident of the new county if it would be named after the county which she grew up in, that being Christian County, Kentucky. Because of Mrs. Neaves position in the community and without any better name options for the county, Mrs. Neaves got her wish, and the new county would be forever known as Christian County.

The man who the county in Kentucky and, subsequently, the county in Missouri is named after is Colonel William Christian, a Revolutionary War solider and politician. Born in Virginia and serving in Kentucky, Christian established Fort William, the base for the modern day city of Louisville. He is perhaps best known for negotiating the Treaty of Long Island, creating peace between frontiersman and the Cherokee in 1777. Christian died while fighting Wabash American Indians in Illinois.

Most of our courthouse burning stories have been related to the Civil War, but that wasn’t the case in Christian County. In 1860, they sold lots in Ozark to build a county courthouse and a log jail. There was an individual at that time named John Hoover Jr., the son of one of the primary founders of the city, who was accused of some kind of crime. The specifics of the crime have been lost to time and…to fire. Hoover believed that there were very incriminating files of him in the courthouse and, in an attempt to clear his name, he burned it to the ground. His attempt turned out to be successful as, after the courthouse was ash, Hoover was never seen again. Even though there wasn’t a conviction of Hoover, there is still evidence of the fire that can be seen on the singed edges of old files.

During the Civil War, the county had a test vote to see whether it, as a county, would be pro-Union or pro-Confederacy. The voting result was 800 to 100 wanting to stay. Christian County was unique during the war as they were overwhelmingly surrounded by Confederate counties. That’s because, in Christian County, the people, other than county officials and founders, were much too poor to own any slaves. There was no reason for the residents to want to maintain the institution of slavery. The ratio was at least five Union soldiers to one Confederate solider in the county.

On August 1, 1862, the Union home guard ended up defending Ozark against a Confederate ambush. The next day, there was another skirmish in Clever, Missouri, which was the second skirmish after the 1861 skirmish at Doug Springs. These barrages weren’t the only confederate onslaught the county had to fight against. Throughout the war, the county repeatedly had to deal with Confederate and Bushwacker raids of crops, livestock and goods. The raids were so bad that it almost depopulated the entire county.

The county is known in modern times for being the home to multiple famous personalities, including former Senator Jay Wasson, the fictional assassin Jason Bourne, and William Austin of Starkly Hearing Technologies (one of the largest makers of hearing aids in the country).